Rolling resistance impacts the environment as well as your finances

The rolling resistance of tyres may differ greatly. A difference of approximately 40% in rolling resistance results, on average, in a difference of 5–6% in fuel consumption. Such a difference may occur, for example, between tyres with a class A and class F fuel efficiency rating, respectively. Therefore, the right tyre can save the environment and money. With the current fuel prices, a tyre with a more economic rolling resistance can save approximately €300 over a driving distance of 40,000 kilometres. A wise choice of tyres and a careful driving style also help to significantly reduce the CO2 emissions that are generated during driving.

Rolling resistance means the energy consumed by the deformation during the road contact of the tyre. This deformation, and the amount of energy it requires, can be influenced with structural and material choices in tyre design. Examples of factors that increase energy consumption include the tyre temperature, tyre pressure, load index and tyre wear, as well as air resistance and turbulence due to the driving speed.

Rolling resistance affects the environment throughout the tyre’s useful life. Light rolling corresponds to lower fuel consumption and CO2 emissions. Rolling resistance is measured in terms of a rolling resistance coefficient: the greater the coefficient, the heavier the tyre rolls. At the moment, class C is the most common fuel economy rating for Nokian Tyres’ passenger car tyres according to the EU tyre label. Class B is the second most common class. The EU tyre label reports fuel efficiency on a scale from A to G. In the near term, improving the fuel economy of tyres is one of the most significant product development targets in the company.

Only about 20–30 per cent of the energy in fuel can be used to move a vehicle. This energy is used in accelerating and braking, but also in overcoming rolling resistance and air resistance. 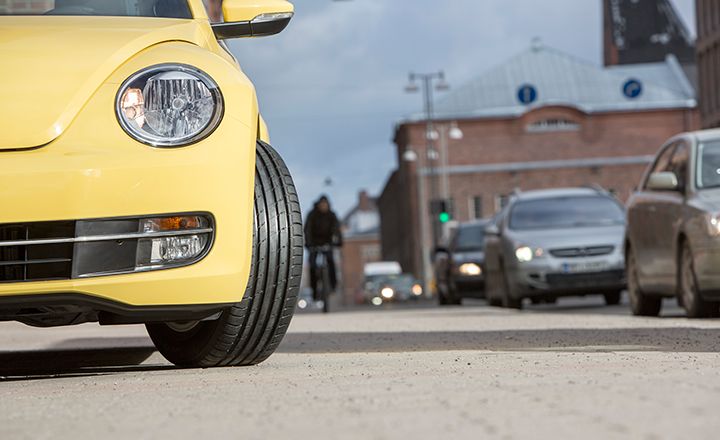