Themes related to biodiversity, such as reducing emissions, reducing the consumption of utilities, or using chemicals that are safe for the environment and health, are part of our group-wide environmental, quality and safety policy as well as our global environmental management system. Supporting biodiversity requires wide-ranging commitment and consideration, and therefore Nokian Tyres has not defined its work as biodiversity work alone, but rather it is a part of almost all of Nokian Tyres' environmental and responsibility work. 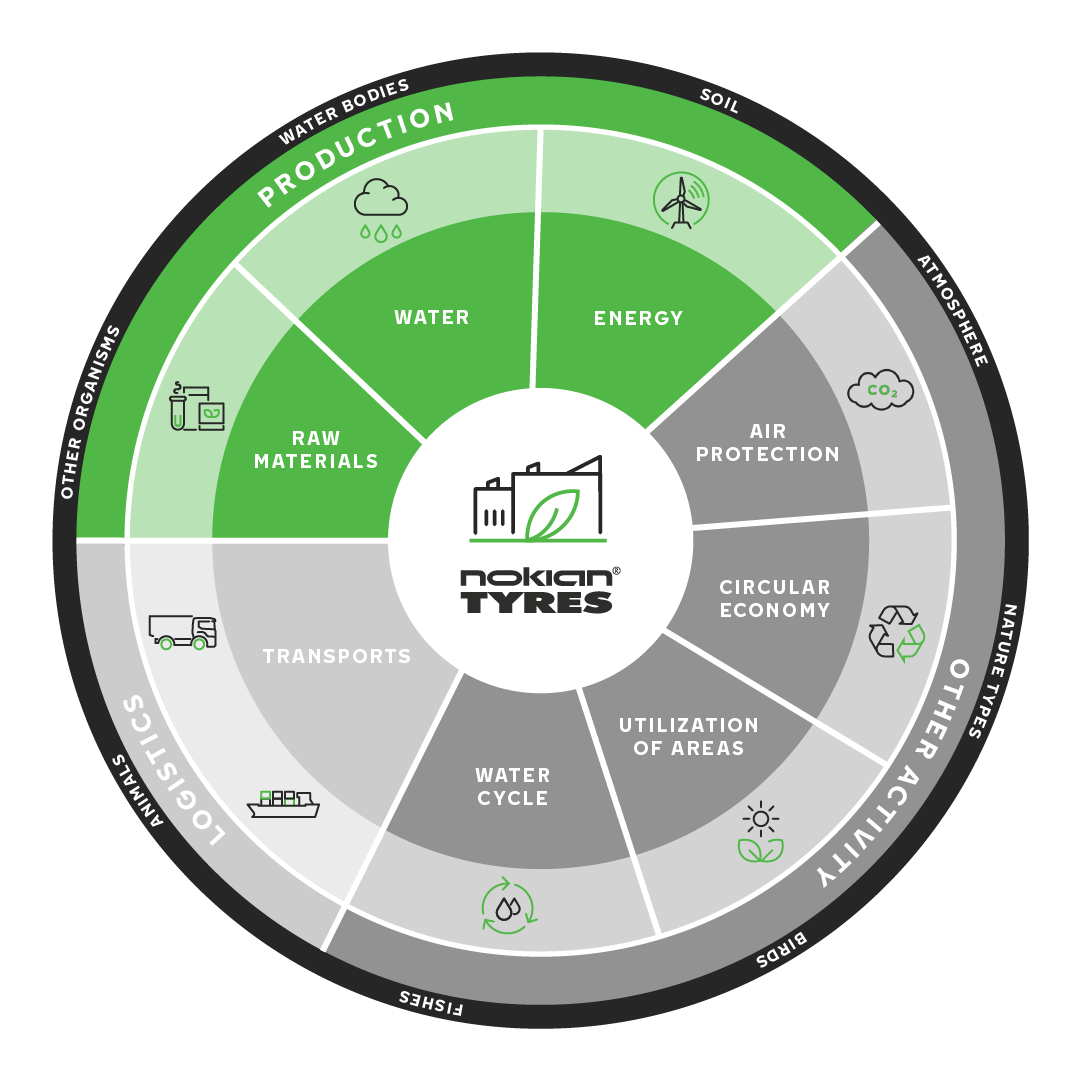 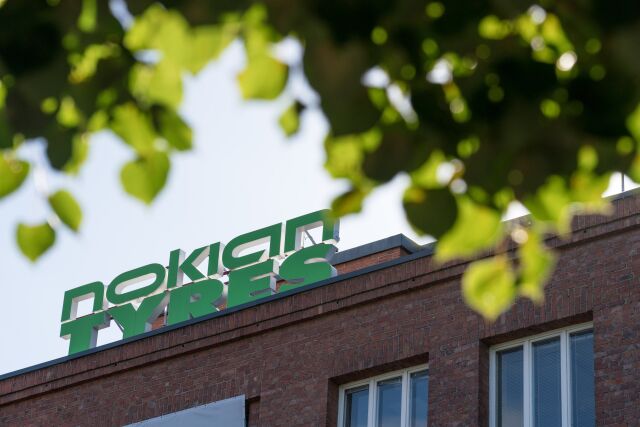 The examination of natural diversity and the factors affecting it started at the Nokian site and has now been extended to our other factories, test tracks and our own retreading plants as well as our Vianor service centers. According to the assessments, the current production activities of Nokian Tyres have no direct effects on biodiversity.

However, the start of operations, such as the construction of factories and other establishments in a certain area, has long-term effects on the area's original biodiversity. That is why we have also considered the requirements of the species living in the vicinity of our operating environments and have tried to develop our own operations taking these requirements into account. For example, in the vicinity of the Nokian Tyres test center in Spain, living conditions have been created for the birds that are similar to what was previously at the site of the test center. 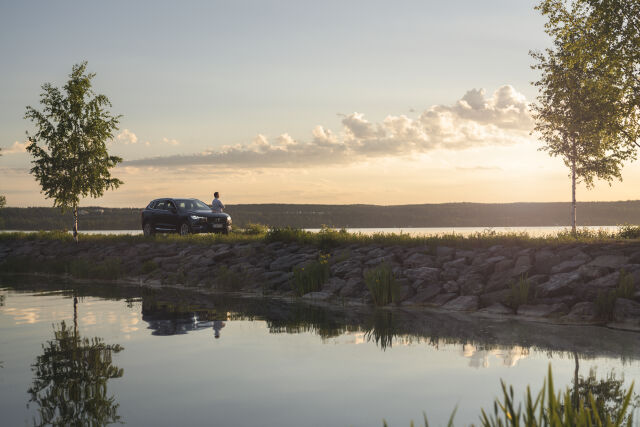 Energy and water use

Our operations are strongly connected to nature and the consumables it offers, such as energy and water use. Whenever possible, we try to use renewable energy in all our operations. For example, the Nokia factory's electricity is produced with 100% renewable hydro and wind power, and the Dayton factory and Nokia's logistics center use solar energy, which is produced by solar panels on the sites.

The majority of the water we use is used for two-circuit process cooling, where the cooling water circulates in its own circuit, releasing its cold energy through the heat exchanger to the process cooling circuit. At no point does the cooling water come directly into contact with the process or the raw materials used. Thus, the cooling water is returned clean to the circulation. At the Nokia factory, we use Nokianvirta river water for cooling, and at the other factories water taken from the municipality's network, which we recycle in a closed cycle and to which we only add water when the water decreases and evaporates. 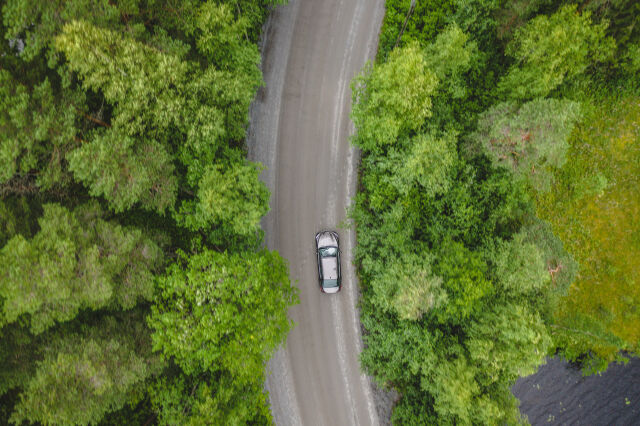 Our operations depend on natural rubber and other raw materials, the production of which requires extensive cultivation or production areas. We therefore indirectly affect the use of land areas outside of our own locations, so consideration of biodiversity is not only focused on our own operations but covers the entire supply chain. For example, as a member of GPSNR (Global Platform for Sustainable Natural Rubber), an international organization promoting responsible natural rubber procurement, we are committed to a sustainable natural rubber policy, which covers, among other things, safeguarding healthy and functioning ecosystems and preventing deforestation. 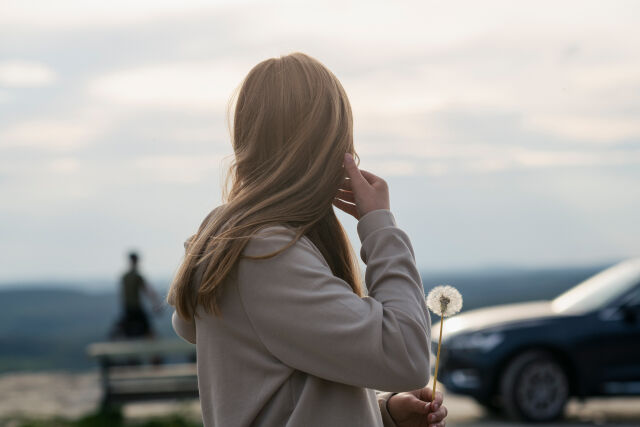 Our operations require resources, such as raw materials and energy, but in addition to finished products, they also cause loss, such as waste. Waste processing, especially landfill dumping, has had a very significant impact on the diversity and nature of the areas selected for waste operations. We are members of ETRMA (European Tyre & Rubber Manufacturers’ Association), which commissions and coordinates tire recycling. We make sure that tires are delivered through dealers for proper recycling.

In our own production operations, we aim to maximize the beneficial use of materials through recycling and minimize secondary processing options, such as energy utilization. Our operations in Finland have not produced any waste sent to landfills for years, and group-wide we have set the goal of increasing the proportion of material recovery and ending the delivery of even the last fractions of waste to landfills globally.

We strive to operate in such a way that the effects on the environment are as minimal as possible. However, our production activities create emissions that are mainly aimed at air. Air emissions are caused, among other things, by energy use and the processing of solvents used in the production of heavy tires in Finland. The processing of raw materials also produces some particle emissions, which can mainly be filtered with particle filters. Carbon dioxide emissions are the largest single emission category that we regularly monitor at all our locations. Carbon dioxide emissions have a significant impact on global warming and thereby change biodiversity, reducing, for example, the number of suitable habitats for certain species. For example, glaciers around the world have begun to melt rapidly because of global warming. In order to reduce our carbon dioxide emissions, we are committed to the SBT (Science Based Targets) initiative, which aims to commit companies to ambitious emission reduction goals.

Our normal production activities do not cause any emissions to water or soil. However, possible emissions can occur in disturbance situations, such as a chemical accident. In such a situation, where a chemical could leak into water or soil, for example, there could be significant effects on the environment in the surrounding area. Chemicals can cause a significant disturbance to the environment in the vicinity and, in the worst case, even death to the organisms in the vicinity. Provisions have been made for possible interference emissions in advance and efforts are made to prevent them as best as possible with correct and controlled methods of operation. Possible emission sources and emissions to the environment are monitored regularly with the help of measurements made by external operators.

Our operations also produce odor emissions and some noise, mostly concentrated in the operating area, which affect the comfort of the surrounding environment and living conditions. On the test tracks, the noise effects are limited to test times, when various motorized vehicles are driven on the tracks. This can temporarily affect the nesting peace of animals and birds nesting in the areas, for example. Vibrations can also be generated like noise, especially on test tracks, but also at our other locations, affecting the living conditions of organisms in the surrounding environment. Especially at Nokia, where river water is used for process cooling, heat has a significant environmental impact. Water is pumped from the river to cool the process and returned to the river after circulation. The returning water is warmer than the surrounding water mass. Temperature differences are affected by the season and weather conditions.

Species living in our operating areas

We have mapped species, especially endangered or otherwise protected species living in our operating areas, because we want to enable the preservation of natural diversity for our future generations. In Nokia, the downstream of the Nokianvirta is home to Pirkanmaa's regional fish, asp, and freshwater pearl mussel, which are assessed as highly endangered species.  Freshwater pearl mussels can live for centuries, and there are only a few populations of them left. Near Nokia's test center, on the other hand, there is a nesting grebe, which is a loon that lives in harsh inland waters. Its strain belongs to the species to be followed regionally. Ivalo's test center is located in a fell landscape in a reindeer breeding area, where we strive to minimize the negative effects on the living conditions of these animals in cooperation with local reindeer herders.

Our test center in Santa Cruz de la Zarza, Spain, is in an area rich in natural diversity, defined as an important habitat based on the EU directive. In connection with the construction of the test center, many studies were carried out on the natural conditions of the area and new living conditions were created that correspond as closely as possible to the habitat that was built on. In connection with the design of the Dayton plant, rare species living in Tennessee were studied, one of which is the Indiana bat. It has been classified as an endangered species due to the loss of its special l living conditions and thus the thinning of the population. Before starting the construction project, a bat observation was carried out in the area, which showed that the area is not an active habitat for bats and therefore the construction work could be started.