Road traffic entered an era of motorways and asphalt. Tyres became the main product for Suomen Kumitehdas. Road safety in winter was a hot topic of discussion, and fiery debate went on about the need for studded tyres and speed limits. The sales of winter tyres were driven forward by a new Government Decree on motor vehicles that determined the minimum tread depth for tyres for the first time.

Suomen Kumitehdas took the initiative in using skid stoppers in winter tyres. The chosen partner was Kovametalli Oy from Helsinki, and the Kometa studs developed in cooperation with Kovametalli entered the market in 1957.

The Haka-Hakkapeliitta tyre was converted into a new type, Kometa-Hakkapeliitta, that had holes for studs. In 1965, all Nokian tyres could be bought with stud holes.  The new introduction for that year, the Hakkapeliitta, was the first winter tyre specially designed for studding.

Nokian Kumiviesti, the customer magazine of the rubber factory, campaigned for safe stud installation. All the tyres on the car needed studding, and studs needed to be placed along different lines.

The strong legacy of Suomen Kumitehdas entered a new phase, when the conglomerate Oy Nokia Ab was born in 1967. The merger joined together the wood processing company Nokia Oy, Suomen Kaapelitehdas and Suomen Kumitehdas. The Kumitehdas logo became the symbol of the company.

At the end of the decade, a new structural innovation - the radial tyre - was being introduced. For manufacturing radial tyres, a new tyre factory was built in Nokia, and it started production in 1968.  It could produce 5,000 tyres per day. The newly built factory attracted many visitors, from schoolchildren to heads of state.

The Haka-Hakkapeliitta was the best-selling winter tyre of the 1950s and 1960s. The range of Haka-Hakkapeliittas that was launched in 1956 and grew to a full size selection two years later was the answer to the new winter driving conditions and even larger cars. The tread had a dense pattern of protrusions that proved effective on icy roads with packed snow, since braking caused a small air pocket to form between the protrusion and the road surface, resulting in suction cup-like grip. The longitudinal grooves on both sides of the centre area were also a new feature of the Haka-Hakkapeliitta. They ensured good directional stability.

Image: The Haka-Hakkapeliitta, a new product launched in 1956, beat all previous sales records. 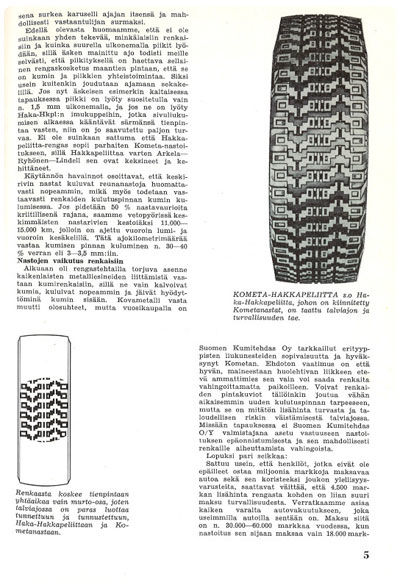 The Kometa-Hakkapeliitta was a triumph of co-operation in studs and a sales success. “In terms of studs, the current winter is a breakthrough. By the time the winter driving season started, nearly all of the winter tyre types that could be used with Kometa studs had sold out. We have been working for decades to develop a suitable skid stopper to overcome the driving difficulties in the winter. By equipping the Haka-Hakkapeliitta tyre with Kometa studs, we have found the answer.” (Managing Director Unto Arkela, Kovametalli Oy, Nokian Kumiviesti 1/1963) 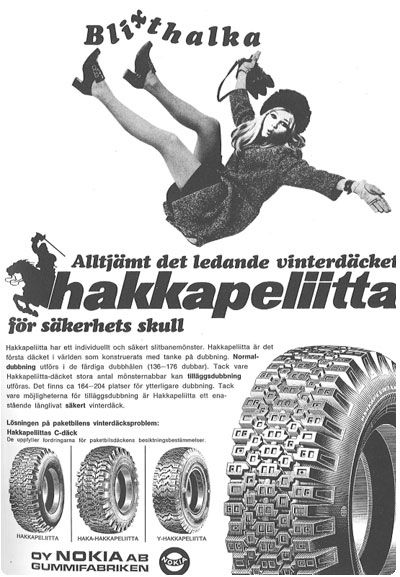 During the early stages of stud development, there was widespread discussion regarding whether skid stoppers should be used on all tyres. In its advertisement, Suomen Kumitehdas Osakeyhtiö reminded drivers: “Your car has four feet. You do wish to drive in the winter. Put four Haka-Hakkapeliitta shoes on your vehicle, and it will obey you even when the road is slippery.” (Nokian Kumiviesti 4/1962) 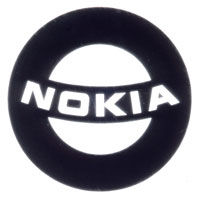 Suomen Kumitehdas Osakeyhtiö published its new logo in 1965. It was the third logo in the company's history. Years and abbreviations had been stripped from the round logo, and it communicated tyre manufacturing more clearly than before. When a neon sign of the new logo was installed on the roof of the factory in Nokia, it was nicknamed “Richter's Moon” after Managing Director Väinö Richter. The round Nokia logo remained in use until 1986. 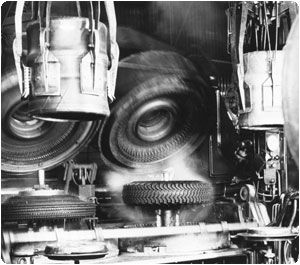 In the middle of the 1960s, sales of the Hakkapeliittas were growing rapidly. Immediately after the company merger, investment was made in a new production facility. The topping-off ceremony for the new factory was held in 1967, and the lines started in July 1968. It featured the state-of-the-art in machinery, such as an impregnating machine that was five stories high and a mangle that could run 60 metres per minute. The automatic Bag-O-Matic curing presses and American NRM assembly machines had already been taken into use earlier. The new tyre factory increased the production of Hakkapeliittas by half.

Image: The Bag-O-Matic press replaced the separate pad installed manually inside the tyre with an integrated, steam-filled curing pad. 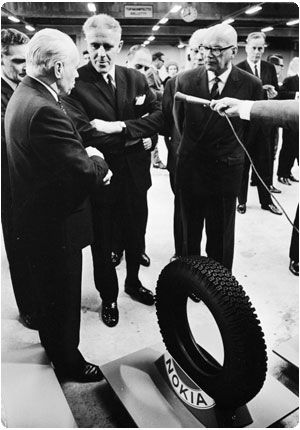 In March 1969, the factory was visited by Norway's prime minister Per Bonten and Urho Kekkonen, the president of Finland. Managing Director Björn Westerlund from Suomen Kumitehdas Osakeyhtiö tells about Hakkapeliitta tyres. Export to Norway had started in 1965, and the country was now the second-largest export destination for Hakkapeliittas.