During the Winter War and the Continuation War, Suomen Gummitehdas focused on the needs of the Finnish Defence Forces, with truck tyres and special products taking a leading role. The only tyre factory in the country was essential for the war effort. Paavo tyres for horse-drawn carts were especially important on the front. When carts were equipped with rubber wheels, troops could be supplied quietly all the way to the front lines.

The shortage of raw materials and delivery problems created a need for substitute materials. Butadiene rubber, or Buna, was received from Germany. The American equivalent was GR-S (Government Rubber Styrene). Synthetic rubber had poorer frost resistance and flexibility than natural rubber. A Finnish synthetic rubber compound was also under development, with experiments in the field of rubber dandelion cultivation.

There was also a shortage of chemicals, such as carbon black. The recipes had to be adapted to the available materials, which caused the compounds to change even before any driving experience was available.

Recycled rubber or regenerate was manufactured from waste rubber. The nationwide collection campaigns produced good results, and the railway station at Nokia was filled with piles of tyres. Regenerate was used more in bicycle tyres than car tyres.

In the midst of the war struggle, Gummitehdas had faith in the future. The construction of a new tyre factory started in 1943 and production started after the war in 1946. Once the war ended, the factory could also meet the accumulated need for passenger car tyres. In 1948, production increased by over one half, as 40,000 car tyres were manufactured in Nokia.

Special products for fighters and bombers: Nokian Nopsa and Brewster-372 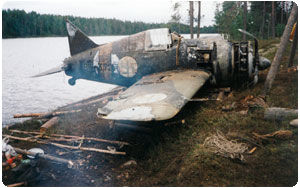 During the war, Suomen Gummitehdas supplied products to the Finnish Air Force. The Valtion Lentokonetehdas aircraft factory, operating in Tampere, was looking for a tyre to be used as a tailwheel for an aircraft. The person making the query was doubting the availability, but Senior Engineer Ensio Salmenkallio from the Gummitehdas tyre department only wanted to know the required size and delivered a suitable tyre immediately. This was a pushcart tyre of size 12x4. Tyres from Nokia provided many take-offs and landings for Finnish aircraft as well as the Blenheims, Brewsters and Messerschmitts.

The Brewster was a fighter plane used by the U.S. Navy in World War II. The all-rubber tailwheel installed on the Brewsters in the United States was suitable for landing on navy aircraft carriers, but it was too small for the Finnish airfields that were in bad condition. The Finns replaced the tailwheels on their planes with the larger, stronger Nokian Nopsa tyre. At this time, the Nopsa was commonly used as a pushcart tyre.

After the war, nearly all the Brewsters were scrapped both in the United States and Finland. Only one aircraft has been preserved. In June 1942, lieutenant Lauri Pekuri managed to do an emergency landing in his burning Brewster-372 fighter into a wilderness lake in East Karelia. The plane was intact when it sunk to the bottom. It was found in August 1998, after several years of searching. The Brewster-372 and its Nopsa tailwheel had been submerged for 56 years. When the plane was lifted, the Nopsa was still at the correct tyre pressure.

Image: Brewster-372 fighter plane. The Nokian Nopsa pushcart tyre was the tailwheel on the plane being lifted out of the wilderness lake. 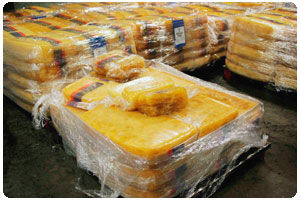 To reduce the material shortage during the war, Finland tried to extract domestic natural rubber from rubber dandelions (Taraxacum kok-saghyz).

The cultivation test that started in the summer of 1943 was led by Professor Otto Valle from the Maatalouskoelaitos agricultural experiments laboratory in Tikkurila and plantations of 1 to 10 acres were located across the country. Even Nokia had its own dandelion plantation. The extracted rubber was compared to natural rubber from tropical areas in the Savio factory laboratory. The quality was equal to raw rubber curdled from jarrah trees, but due to the work-intensive separation method and small crops, rubber dandelion was not considered profitable. One ton of rubber would have required a plantation area of 10 hectares. The rubber dandelion experiment ended in 1947.

Image: The main raw materials for tyres are natural rubber, synthetic rubber, carbon black and oil. Approximately half of the rubber used in modern tyres is still natural rubber.

In 1940, the price paid for recycled car tyres was 2 Finnish Marks per kilogram; inner tubes were FIM 4.5 per kilogram. During the war years, new rubber products were only available for purchase against waste rubber.

Suomen Gummitehdas had a special regeneration plant for refining waste rubber. The work was rather challenging. “It is easier to turn an omelette into eggs with shells than to make rubber waste as good as raw rubber,” said manager Ensio Salmenkallio from the tyre department.

Winter tyres for every road

When the Hakkapeliitta was born, buses and trucks worked especially hard in traffic. This became even more important during the war, and goods transport ruled the roads until the end of World War II. A reliable winter tyre was in demand for many different kinds of special vehicles, such as fire engines, logging trucks and snow ploughs. The mantle of the Kelirengas, which was designed for trucks, was successfully passed on to the Hakkapeliitta for trucks that was designed in 1940.